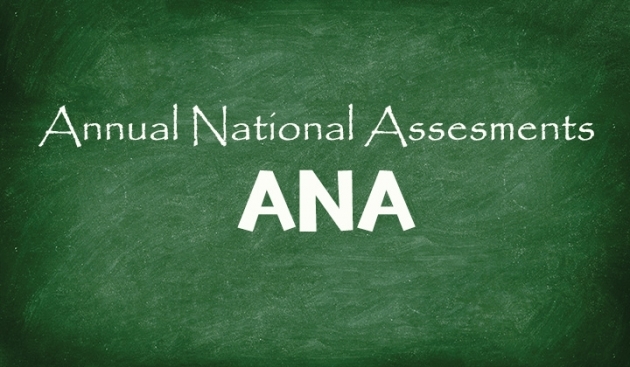 In September 2013 over 7 million learners in Grades 1 - 6 and Grade 9 in South Africa were assessed to determine their levels of competency in Literacy and Numeracy. This was the third time since 2011 that an assessment of this magnitude has been conducted under the umbrella of the Annual National Assessment (ANA), an initiative of the Department of Education (DBE) to improve the quality of performance in the system.

ANA was put in place by the DBE as a strategy to annually measure progress in learner achievement towards the 2014 target of ensuring that at least 60% of learners achieve acceptable levels in Literacy and Numeracy.  ANA is one of the initiatives that form the backbone of the DBE's Action Plan to 2014: Towards the Realisation of Schooling 2025. ANA targets Literacy and Numeracy because these have been found universally to be the key foundational skills for successful learning in school and beyond. The tests are administered in all the eleven official languages in the foundation phase and in the two languages of teaching and learning in the Intermediate and Senior Phase. Necessary adaptations are effected for learners who experience various kinds of learning disabilities to ensure that every learner has the opportunity to demonstrate what they know and can do in the assessment.

Parents are advised to support their learners in the preparation for ANA 2014 and to ensure that the results are made available to them, so that this information could serve as an important diagnostic source of the areas of strength and weakness, of the learner based on a standardised national test.

What is literacy and numeracy?

Why is the Department administering these tests?

The DBE is determined to improve the language and mathematics skills of our learners. The Department has set specific targets to be achieved by 2014 and beyond. The ANA will be used to measure learners’ progress and to establish the level they are performing at.

What will ANA be used for?

The ANA will NOT be used for learner progression or promotion. It is a tool to assess whether a child needs extra help or not. Teachers will see to what extent the learners in their classes measure up to expectations. They will use the results to inform their lesson plans. District officials will use the results to design school improvement plans and to render appropriate support to schools.

Who sets the ANA?

ANA tests are set by competent subject experts and teachers who are selected and appointed by the DBE.

All Grades 1-6 and 9 learners in public schools will write ANA, according to a nationally-set timetable. Either Grade 3 or 6 learners, whichever is the highest grade in a school, will write the test in Independent Schools that receive government subsidy.

What will learners be tested on?

The learners will be tested on the language and numeracy skills they have learnt during the particular school year. Knowledge and skills developed in earlier years may also be assessed but the DBE provides guidelines on the scope of work to be covered in the tests.

Who will administer and mark the tests?

Marking of all ANA tests will be done by the teachers, guided by the memoranda provided by the DBE. In addition, the DBE and Provinces conduct centralised moderation of samples of marked scripts from schools to verify the quality of marking at school level.

How are ANA results verified?

Samples of schools and learners will be drawn by a competent independent agent to verify both the process and the results of ANA.

How are ANA results reported?

The Minister of Basic Education will provide a national report on learner performance in December 2014.

What are the Department’s targets for improving literacy and numeracy in the Foundation Phase with ANA?

The DBE would like to see at least 60% of learners achieving acceptable levels of literacy and numeracy by 2014 and this is to go to 90% by 2024.

Will parents be informed of the ANA results of individual learners?

Parents will be informed of their children’s performance by the school. The school will send out an ANA report to each parent that will give their child’s individual results and explain in which areas the learner has achieved and also the areas in which the learner will need to improve.

Each school must also call a meeting to explain to parents what the results mean and to explain clearly how the school plans to improve results.

How do I know what my child’s results mean?

ANA is useful for measuring to what extent a number of teaching goals had been achieved. Learner achievement, in Grades 1-6 and 9, is graded on a seven point scale:

So, in all grades at least 50% is required in order to be deemed to be performing at the “adequate achievement” level.