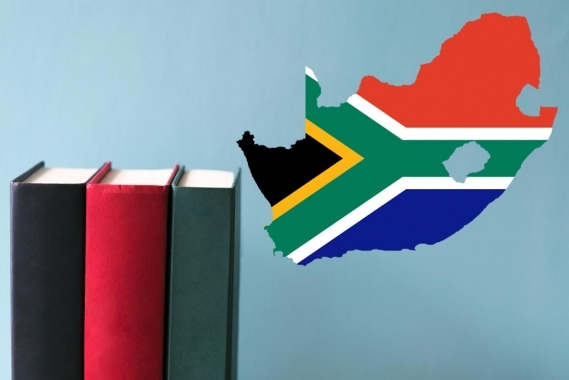 All South Africans have the right to a basic education, including adult basic education and further education. According to the Bill of Rights of the country's Constitution, the state has an obligation, through reasonable measures, to progressively make this education available and accessible.

South Africa has one of the highest rates of public investment in education in the world. At about 7% of gross domestic product (GDP) and 20% of total state expenditure, the government spends more on education than on any other sector.

School life spans 13 years or grades, from grade 0, otherwise known as grade R or "reception year", through to grade 12 or "matric" – the year of matriculation. General Education and Training runs from grade 0 to grade 9.

Under the South African Schools Act of 1996, education is compulsory for all South Africans from the age of seven (grade 1) to age 15, or the completion of grade 9.

Since 2009, the national Department of Education has been split into two ministries: Basic Education, and Higher Education and Training. Each ministry is responsible for its level of education across the country as a whole, while each of the nine provinces has its own education department.

The Ministry of Basic Education focuses on primary and secondary education, as well as early childhood development centres.

The Ministry of Higher Education and Training is responsible for tertiary education up to doctorate level, technical and vocational training, as well as adult basic education and training.

It also oversees public and private FET colleges, which cater for out-of-school youth and adults. The government aims to have 1-million students enrolled at colleges by 2014.

The split also saw the sector education and training authorities (Setas) move from the Department of Labour to the Higher Education, aiming to foster a more co-operative approach to skills development.

The central government provides a national framework for school policy, but administrative responsibility lies with the provinces. Power is further devolved to grassroots level via elected school governing bodies, which have a significant say in the running of their schools.

Private schools and higher education institutions have a fair amount of autonomy, but are expected to fall in line with certain government non-negotiables – no child may be excluded from a school on grounds of his or her race or religion, for example.

South Africa relies on the matric pass rate as a significant marker of what's going on in its schools. The matric pass rate, which was as low as 40% in the late 1990s, has improved considerably. A total of 496 090 candidates sat the matriculation exams in 2011, 70.2% of whom passed. Of those who wrote exams, 24.3% qualified for university study.

The latest available statistics from the Department of Basic Education show that in 2010 South Africa had 12 644 208 pupils and students (also known as "learners"), enrolled in all sectors of the education system, attending 30 586 educational institutions and served by 439 394 teachers and lecturers (also known as “educators”).

The total of 25 850 ordinary schools comprised:

Other educational facilities include:

In South Africa, the average ratio of learners to teachers is 29.3 to one, with public schools generally having larger classes, while independent schools’ average around 17.5 learners to one teacher.

Higher Education and Training, or tertiary education, includes education for undergraduate and postgraduate degrees, certificates and diplomas, up to the level of the doctoral degree.

A matric endorsement is required for the study of university degrees, with a minimum of three subjects passed at the higher, rather than standard, grade, although some universities set additional academic requirements. A standard school-leaving South African senior certificate is sufficient for technical qualifications and diplomas.

According to figures from the Council of Higher Education, 892 936 students (726 882 undergraduates and 138 610 postgraduates) were enrolled in South Africa’s public higher-education institutions in 2010. Staff employed by these institutions numbered 127 969, with 46 579 of those academic staff.

Many of South Africa's universities are world-class academic institutions, at the cutting edge of research in certain spheres. Although subsidised by the state, the universities are autonomous, reporting to their own councils rather than government.

The National Student Financial Aid Scheme (NSFAS) was established in 1999 to make higher education possible for financially disadvantaged students through loans and concessions, such as not charging interest on student loans until 12 months after a student has graduated.

Compared with most other countries, education gets a very large slice of the public pie – around 20% of total state expenditure. It receives the largest share of government spending.

More money is always needed to address the huge backlogs left by 40 years of apartheid education. Under that system, white South African children received a quality schooling virtually for free, while their black counterparts had only "Bantu education", a keystone of the overall apartheid system.

Although today's government is working to rectify the imbalances in education, the apartheid legacy remains. Illiteracy rates currently stand at around 18% of adults over 15 years old (about 9-million adults are not functionally literate), teachers in township schools are poorly trained.

Despite the challenges, much has been achieved since apartheid legislation was scrapped. For example, in 1993 nearly half of all students in higher education institutions were white, 40% were black, 6% were coloured, and 7% were Indian. By 2005, the portion of white students had fallen to 25% and the black share had grown to 61%.

South Africa’s student participation rate – that is, the proportion of 18- to 24-year olds in higher education is almost 20%.

But equity has yet to be achieved: almost 57% of whites and around 45% of Indians enter higher education. The rate for coloureds is 14.8%, while blacks are even lower at 13.3%. The reason for this is generally understood as poor quality primary and secondary schooling, which is a priority for the current government.

The government’s newest strategy for turning education around is known as “Action Plan to 2014: Towards the Realisation of Schooling 2025”, which aims to improve learning and the work of teachers.

With a new curriculum at its heart, the focus is on literacy and numeracy. Known as the national Curriculum and Assessment Policy Statement (CAPS), the new curriculum provides very specific guidelines to streamline what is taught in schools with the aim to close the divide between well-resourced and poor schools. Curriculum implementation is supported through the national educational portal, Thutong (Setswana, meaning "place of learning").

Other measures include the introduction of standardised assessments of grade three, six and nine to better track progress; an emphasis on early child development and universal access to Grade R; ensuring learners have access to good quality textbooks; and improving school infrastructure and strengthening school management.

Teacher education and development programmes have also been strengthened, including funding for bursaries for trainee teachers.

The education of the poorest of the poor remains a priority, and includes two notable programmes. One is no-fee schools, institutions that receive all their required funding from the state and so do not have to charge school fees. These have been carefully identified in the country's most poverty-stricken areas.

The other is the National Schools Nutrition Programme, which gives more than 7-million schoolchildren a cooked meal five days a week.

Source: SouthAfrica.info
Facebook Twitter Pinterest Reddit
The Positive Influence of Being Involved in your C...
What is a Montessori School?
Help your Child Study Without a Fight
Back to school sanity saver #9 Homework
When the going gets tough
My special needs son
Time Management Tricks for Parents and Pupils